With 16 million inhabitants, 79% of which living in rural areas, Cambodia is highly concerned by the access to drinking water issue. 30% of the rural population still relies either on unimproved water source or surface water, thus significantly placing their health at stake. This challenge also affects the schools, with over 60% of them lacking access to safe water.

Since 2004, 1001fontaines has recruited, trained and supported micro-entrepreneurs bring safe drinking water to their rural communities in an autonomous and sustainable way. 1001fontaines serves clean drinking water to communities in both Cambodia and Madagascar with over 200 water kiosks that serve 400,000 people with clean water. In 2019, two new initiatives are starting in Vietnam and Myanmar, to confirm the potential of the model to fit in different contexts and achieve large-scale impact. 1001fontaines has received support from strategic partners to scale their initiative, such as the Google Impact Challenge - France in 2015 (€ 500,000), and the Development Innovation Ventures Awards from USAID in 2016 ($ 500,000).

In 2008, 1001fontaines was the first Safe Water Enterprise to start a Safe Water for Schools program and now serves 250,000 students daily - a number rapidly growing with the opening of the program in the new countries of operations. 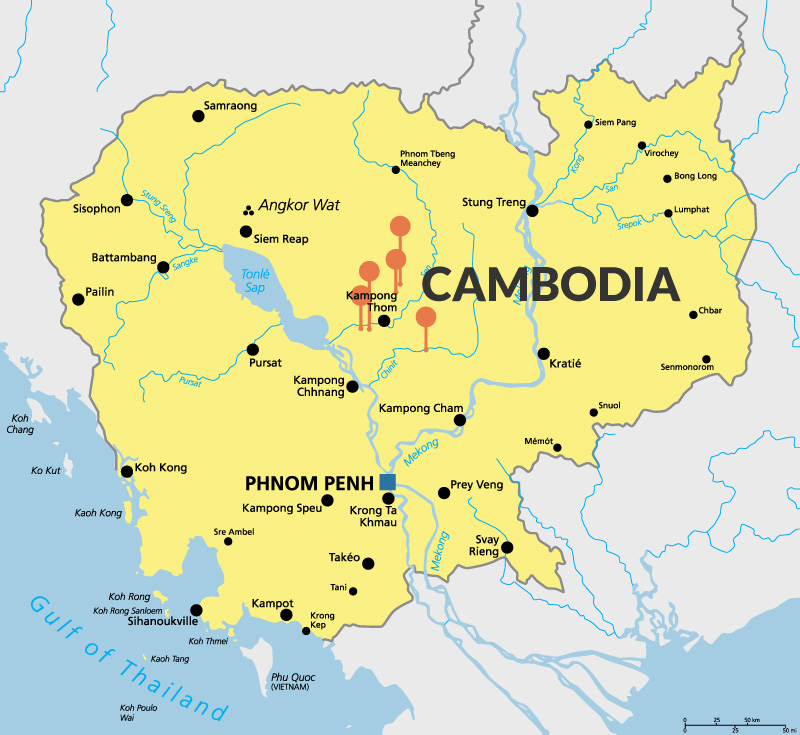 How your dollar is spent in

Awareness/Tech Support
$0.31
Total
$1.80
Cost per year for 1/2 liter of safe water to be delivered per student daily

The Schools Get Clean Water in

1. The water is pumped from the nearest available water source (well, river or swamp)
2. The water goes through a sand filter to remove large physical contaminants
3. The water then goes through another series of filters to remove finer particles, RO to remove bacterial contaminants and UV for microbial contamimants.
4. Clean and disinfect the water jugs
5. Fill the water jugs
6. Close and seal them
7. Deliver the jugs to the school
8. Students drink safe water!
9. Teach children about hygiene and safe water practices

Hun Sen Sandan Primary School is located in the North East of Kampong Thom province. 591 pupils from 6 to 12 years old attend school which has no access to clean water.

The Mean Primary School is located in the northern part of Phnom Phen, Cambodia with 985 students. The students range in age from 6-12 years old. The school as no access to safe water.

Preksbouv Primary School is located in the Kampong Thom province, southeast from Siem Reap in Cambodia. The school teaches 263 students from ages 6-12. The school has no access to safe water.